Since the middle Ages, flax was grown on the fields around Schlotheim. This was a very active trading, and since Schlotheim was located on a very busy trading route, the Salzstraße, it became a market town called “Flachsmarkt”. 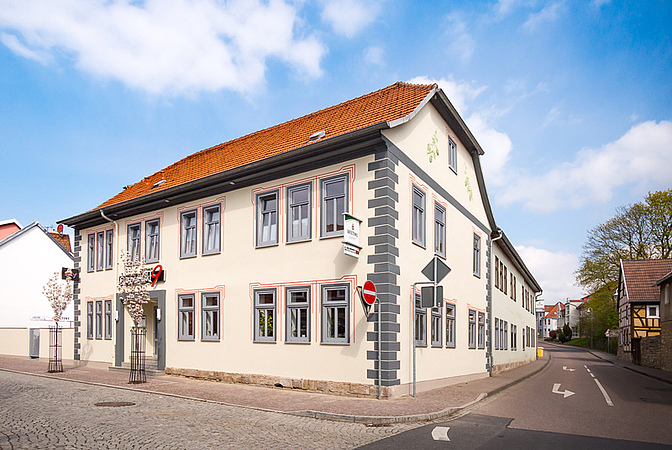 Flax is the raw material for linen, ropes and cords, so the linen weaving and production of ropes and cords developed. In 1624 the first cord maker named Peter was mentioned. 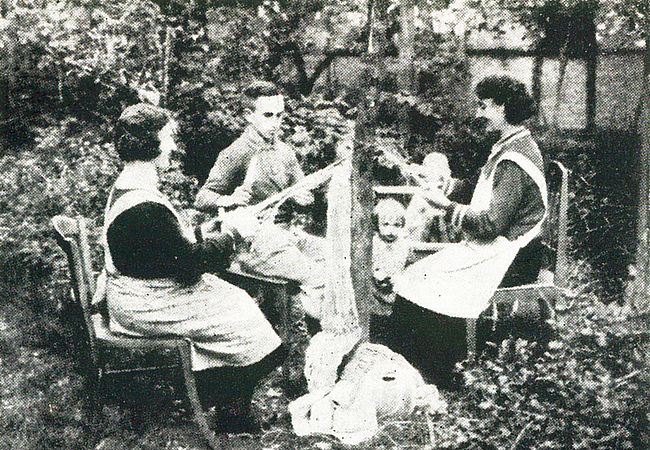 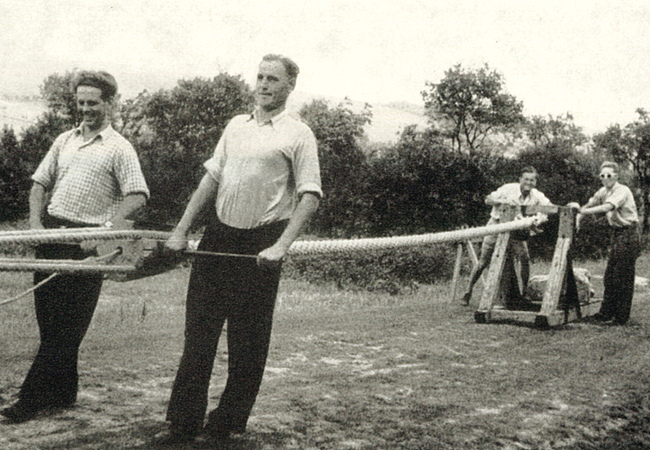 With the first visits to several fairs from 1840 and the connection to the new road system, the industrial boom happened and new factories were founded, e.g.

Today the building of ex-company Friedrich-August Müller is a retirement home. 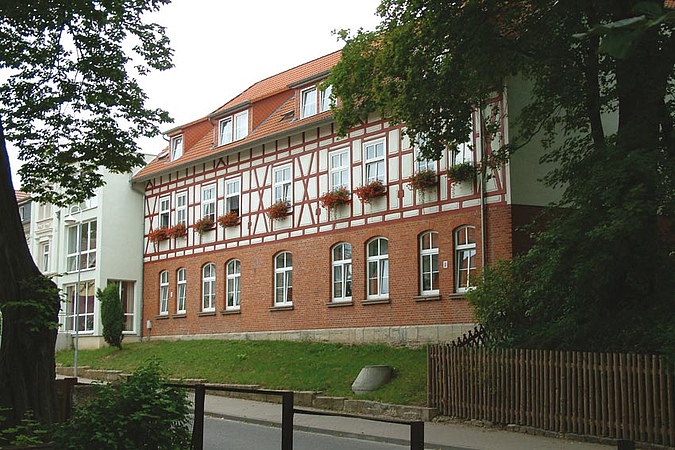 The Cord maker companies Friedrich-August Müller and Brothers Martini (Förster & Veith) were dispossessed and became one by the order of the Soviet military administration because of Nazi involvement. The owner of the company Müller & Wimmer was not evidenced of Nazi involvement and was able to keep 60% of the company. In 1952 the company was dispossessed completely because of not admitted inventory of hemp cords. The company was incorporated to the VEB Schlotheimer Net-, Cord- and Rope factory, which was founded 01.01.1949 and was much smaller, with only 150 staff members. 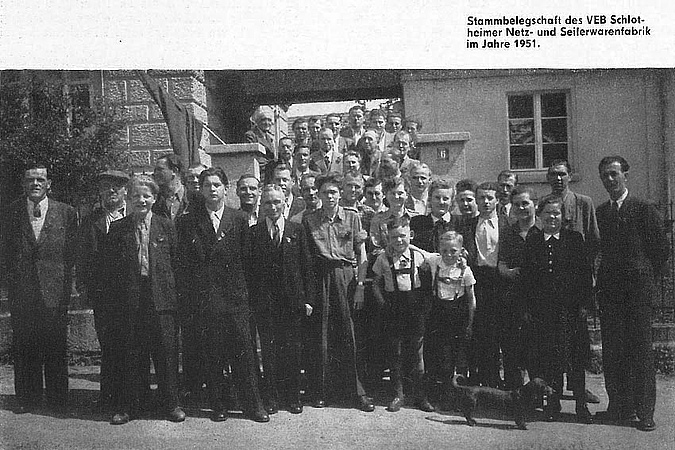 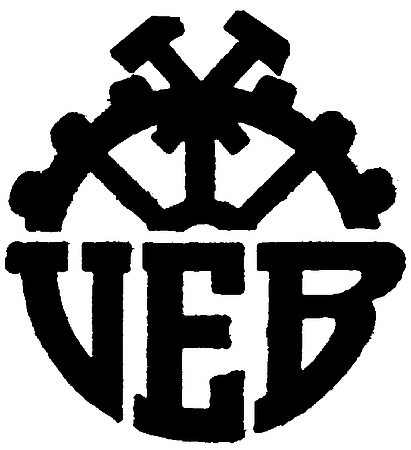 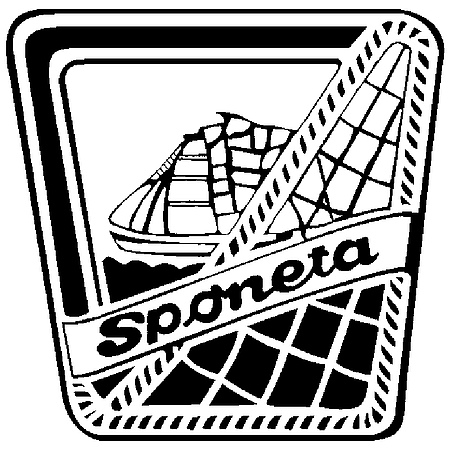 The company presented their products, sporting goods, nets, ropes, on a fair in Leipzig. It was the idea of an advertiser from Leipzig, who was in charge of the layout of the catalogues, to use it short for the company acronym. 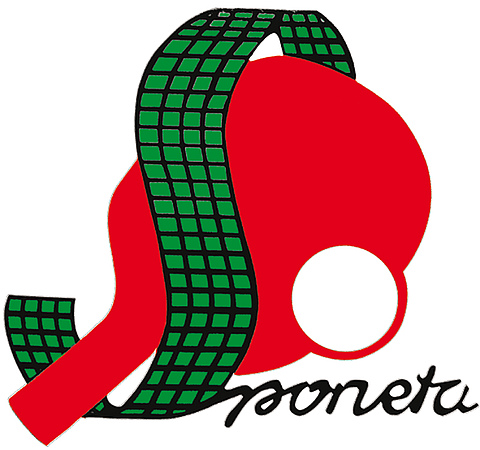 The development of the production of sporting goods was pushed, first of all the table tennis games and bats, but also sporting nets of all kind. 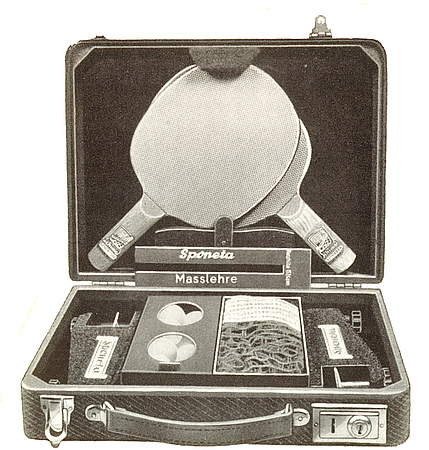 At the end of the 1950s, the production for plastic coated clothes lines started. The factory in Schlotheim was the only producer of this product and exported especially to Western Europe. 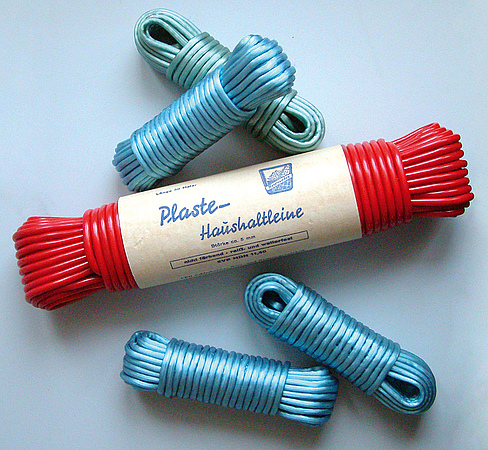 The VEB “Schlotheimer Net-, Cord- and Rope factory” was dissolved away from the VVB Bastfaser Leipzig and was allocated to the council of economic advisers directly.

"Litzenmaschine" for the production of strings 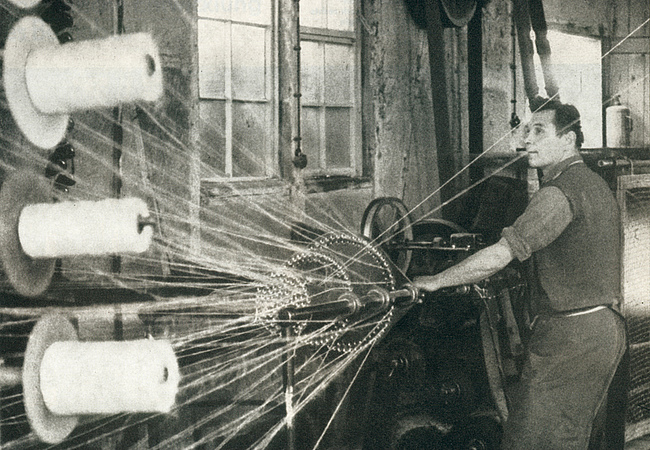 The first competition nets are produced. But the first net set from Schlotheim was not under the brand of Sponeta. The company Erlau developed a competition net set as well and had it patented. Sponeta was only able to produce an alternative which was not so good, to avoid the patent protection. That’s what the sales manager from then says after decades. 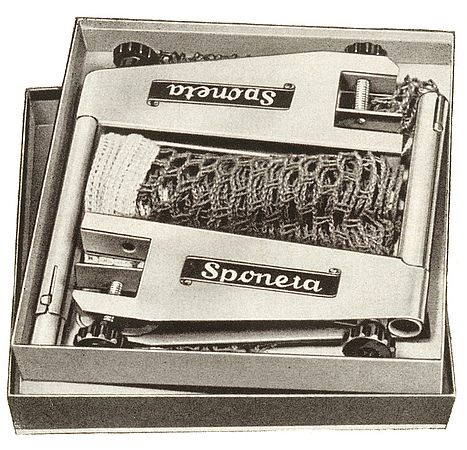 The brand “Sponeta” becomes part of the company name:

Starting 1971, the assortment was completed with table tennis tables, by the suggestion of a French customer.

The base for that was the construction of new production facilities. The today known place of the company became advanced and developed.

The development of the table tennis tables happened in several steps:

The first table consisted of 2 separate table halves. They were arranged together and fixed with the net set. The second table was foldable. This made packing in a box for shipping possible.In the third step, the tables became mobile. Sponeta had the most modern table tennis production worldwide and started to bring “foreign money” into the country with sales into the not socialistic economic area.

Eventually it was experimented with weather-proof materials. The first tables made of fiberglass added polyester resin boards were produced. Tissue was coated with polyester resin in a cast process or was dunked in the polyester resin by hand. This technique was already used in the company for the production of water carriers for military needs. Because this method was hazardous to health, it was no longer used. Instead Sponeta started with the still used melamine resin boards. 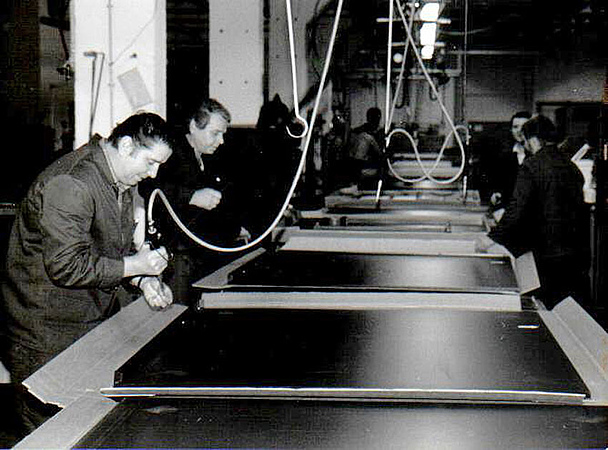 In 1972 the tournament tables became part of the sales program.

1972 the GERMINA organization (trade mark organization of the sports equipment industry of the GDR) was founded. Sponeta joined this organization and was now represented on all great international fairs.

Also in 1972 the company Erlau Net-, rope and sporting goods  (Ernst Laube), at this moment only partly nationalized,  was dispossessed and with its rope – and sporting goods production incorporated to the VEB net-, cord- and rope factory Sponeta.

The product range included now, next to the above mentioned goods, floor covering and camouflage nets. (These were produced for the socialist economic area, especially for the Soviet Union). 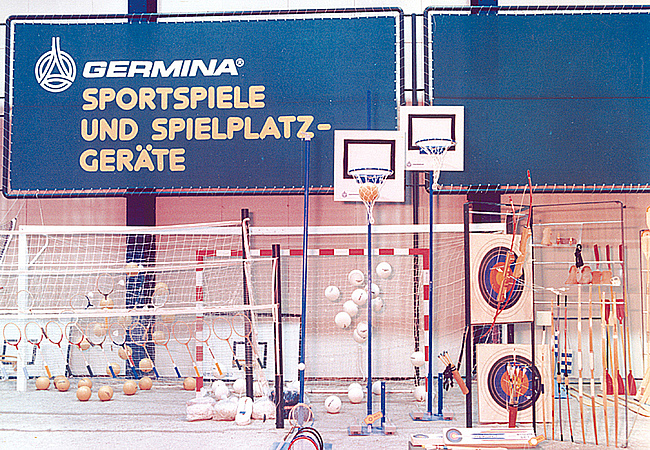 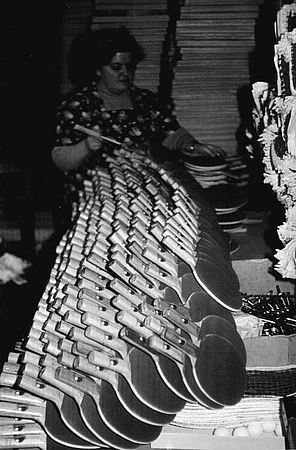 The VEB Sponeta became VEB combine Sponeta and 14 likewise industries were affiliated. After that, the combine had several other locations inErfurt, Arnstadt, Apolda, Mühlhausen, Leinefelde, Nordhausen and Sondershausen.

Head office and main factory was still VEB Sponeta Schlotheim. The combine now had 4.000 employees, about 1.700 in Schlotheim. 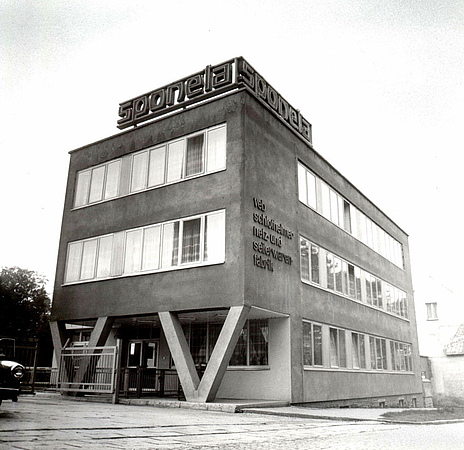 At the Leipzig fair 1983 members of the party leadership and government of the GDR visited the booth of VEB combine Sponeta. 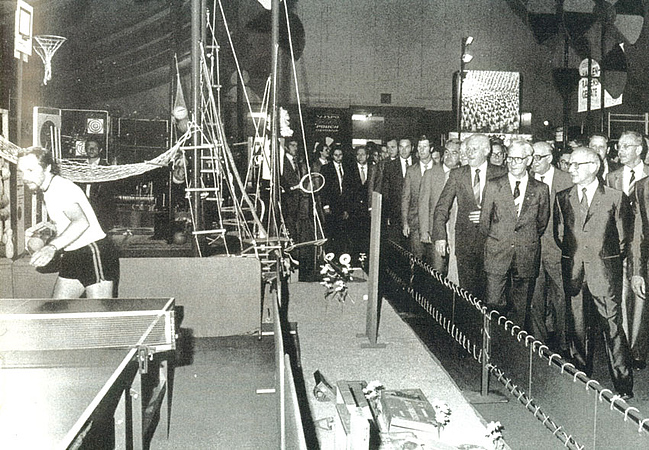 The table tennis table “Primat” was honored with the gold medal on the Autuum fair inLeipzigfor the most sold hobby table. 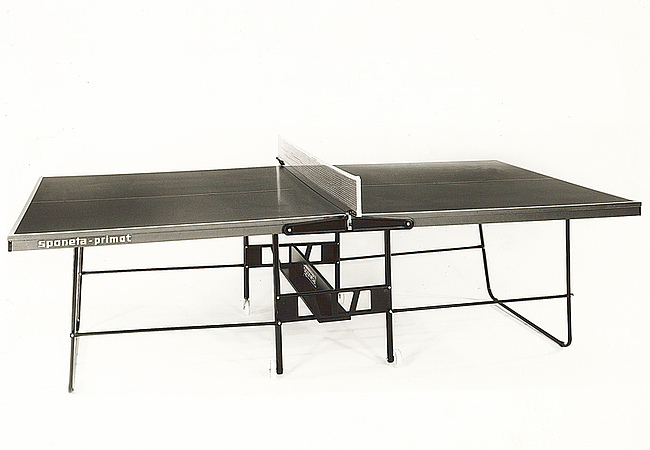 In the middle of the 1980s, Schlotheim was the center for table tennis sports equipment in the GDR.

headquarter of the Kombinat in Schlotheim 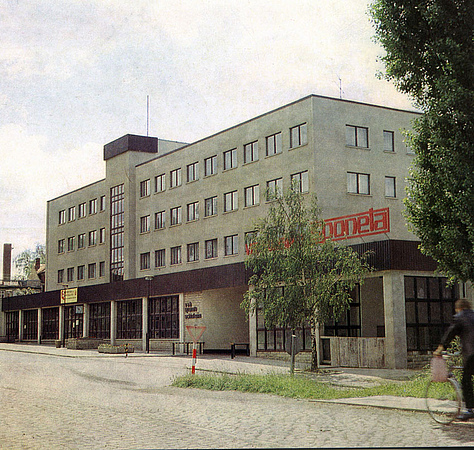 With the political turn 1989/90, enduring and drastic changes happened to Sponeta as well. After the Monetary and Economic Union the main company transformed, by trust, into “Sponeta GmbH in development” between 17. June 1990 and 01. July 1990.

The company, at that point with still 1.300 employees, had to be detangled and privatized with the goal to keep as many jobs as possible.

A market- and cost analysis for table tennis manufactures brought the decision to continue this division. New and different model lines for Hobby and tournament tables were developed, modern and environmental friendly technologies and techniques introduced. Melamine resin materials were used for the production of weather-proof tables.

29. June 1991, after signing the contract of association, Sponeta was registered as a whole GmbH (limited liability Company) into the Commercial Registry.

Because of similar production processes, to adjust seasonal variations on table tennis products and because of good growth prospects, Sponeta started to develop and produce furniture for schools and institutions. 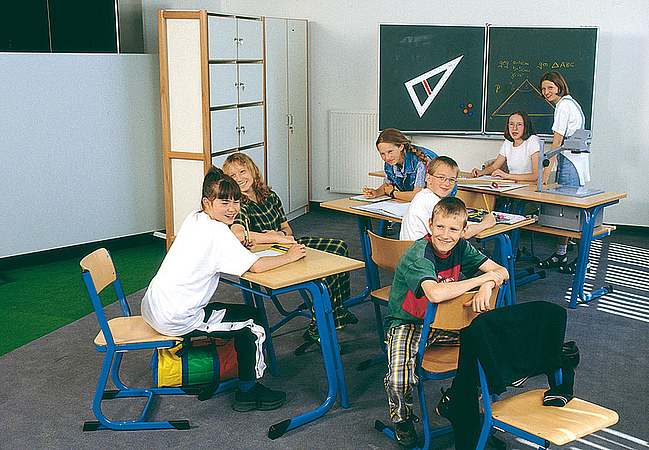 Until August 1993, based on new company concepts, not needed production facilities were, after dissolution, sold or given back to their former owners (e.g. Erlau, today Wiegand GmbH). 30 companies with different branches were founded on old Sponeta facilities, 1.200 jobs created or kept. A success story, not least realized by the dedication of the former company management.

25. August 1993, Sponeta got privatized with 120 employees by management buy-out. The previous manager and 2 other colleagues from the management level took responsibility.

The production facilities, which were mainly not on a new standard, got renewed, manufacturing facilities drastically extended.

The development of an own test laboratory was the start for a successful construction of tournament table tennis tables. The tournament tables “Made by Sponeta” passed several critical tests by European – and World champions. Today Sponeta GmbH is reliable supplier for many well known brands. 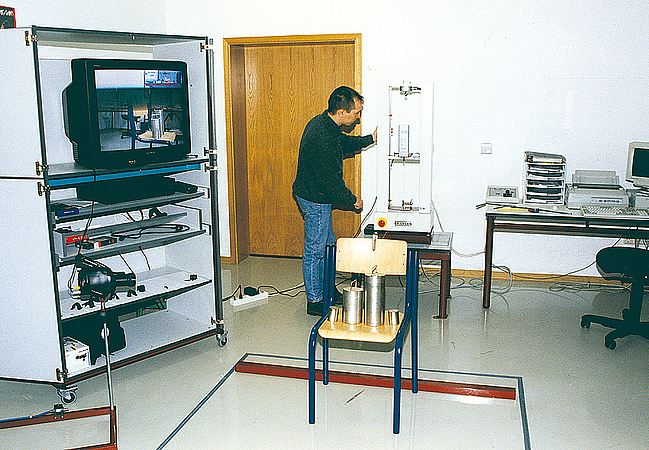 The look of Sponeta got improved by modernization of the offices and the outdoor facilities. 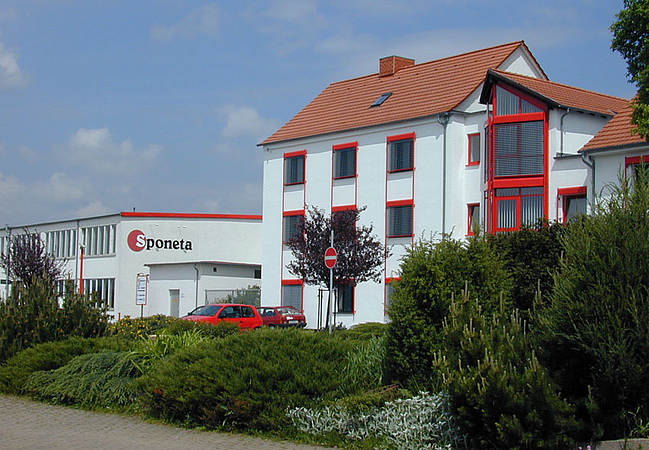 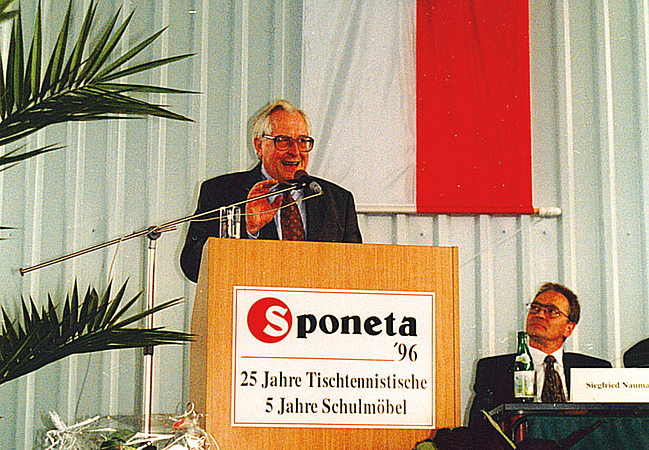 The quality management of DIN ISO 9001 was founded. Sponeta got the certificate in 1997. 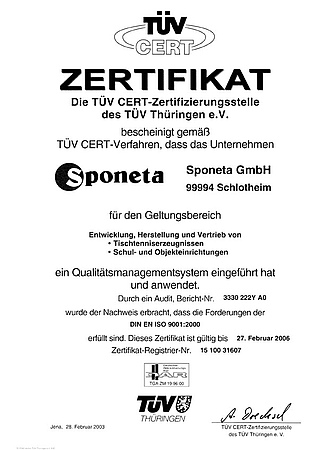 The beginning of cooperation with a standardization committee for a creation of a European standard for table tennis tables (EN 14468-1) and net sets (EN 14468-2). 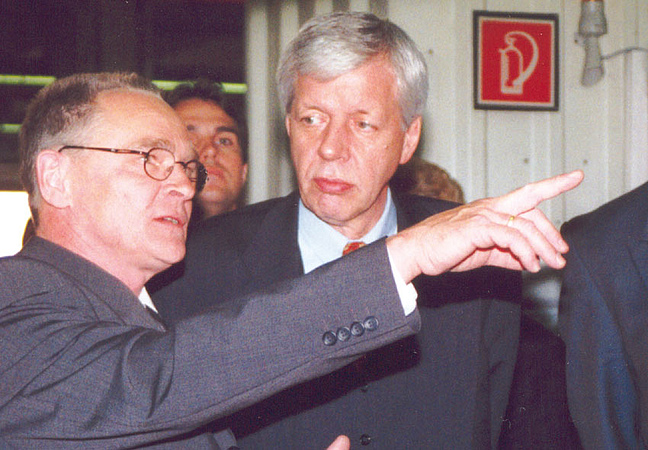 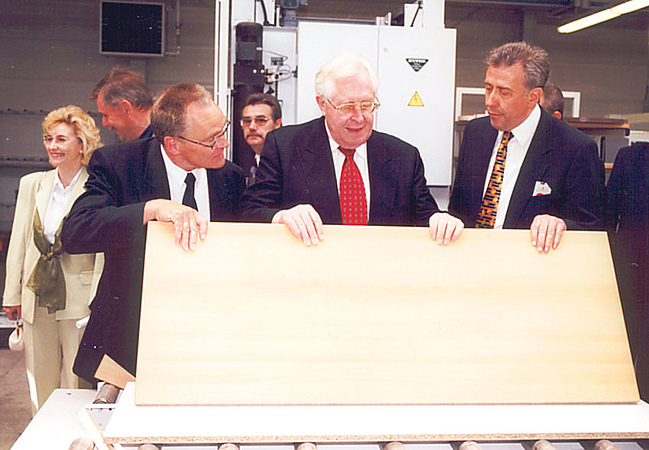 The Sponeta GmbH (limited liability Company) changed to laser-technology in pipe and machining processing. That leaded to capacity and quality increase. 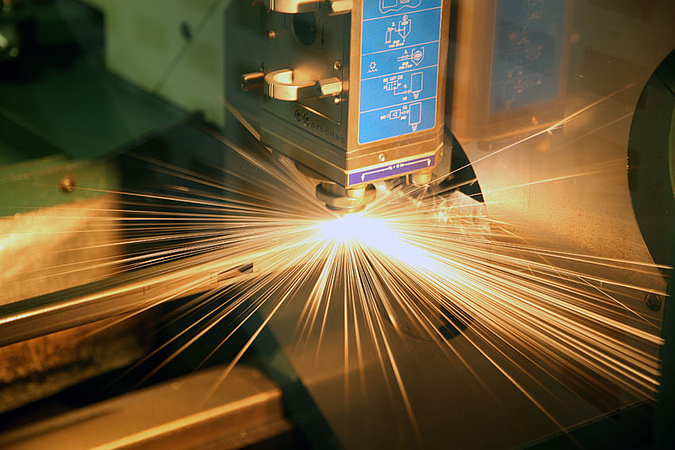 Finish of the construction of the new logistics and assembly hall for the production of furniture for schools and institutions. Sponeta worked out a promising position on the market for its second division of the company by a reliable cooperation and high quality products.

Sponeta turns 50. Great personalities of politics and economy take part at the festivities. Even the prime minister Dieter Althaus.

All the table tennis tables changed to the European Standard 14468-1. They’re all conforming to highest safety- and quality requirements. 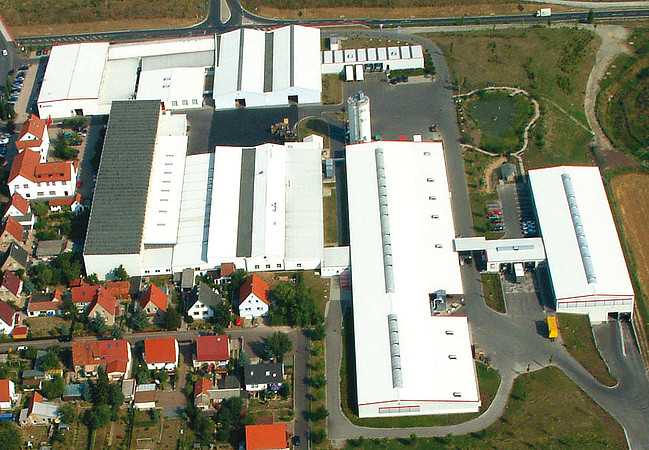 The Sponeta GmbH grows so fast that the old company grounds are too small to assure a smooth production flow. At the end of 2010 the construction of a new table tennis logistics hall and a employee parking lot started on a nearby estate. 2012 it was inaugurated. 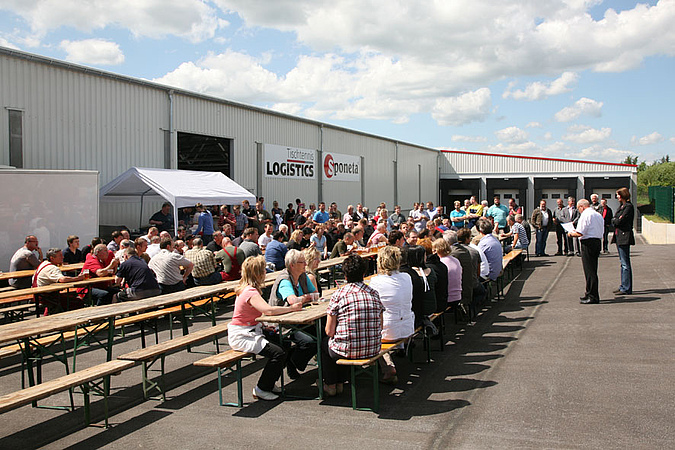 This year Sponeta could celebrate two significant anniversaries: 60 years of company foundation and 20 years of privatisation.

The wall on our northern property line becomes a 150-square-meter advertising space.

video of the creation

The Sponeta GmbH is awarded the seal "Commitment to sustainability".

After a comprehensive company audit in terms of Ecology, Economics and Social Competence (product, service and quality of advice, economic future alignment, business management as well as ecological and social responsibility), the Sponeta GmbH has received the seal according to the Procedural Regulation D-17/400780. 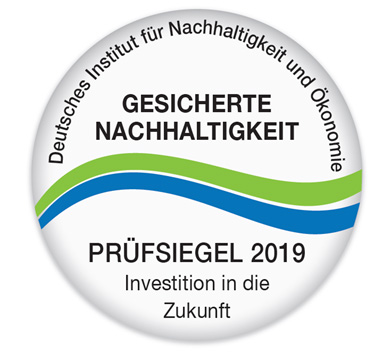